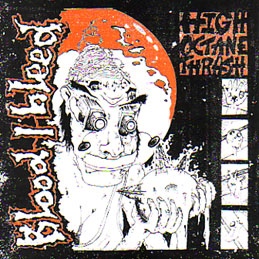 Founded in 2002 by former members of well-known violent hardcore/grindcore outfit My Minds Mine.
Essentially a logical continuation of what the Dutchmen have been doing for years, yet a new approach to the overall expression based on and inspired by renown acts like Heresy, Intense Degree or S.O.B., to name a few.
Influenced by the 80's hardcore, grindcore, as well as Japanese hardcore bands, the furious quartet is a force to be reckoned with.
High velocity hardcore / thrash with power that cannot be denied.
"High Octane Thrash" comprises a big part of all the songs Blood I Bleed has put out on vinyl so far, such as the self-titled 7", the split EP's with Under Pressure, Sound Like Shit, Unholy Grave, compilation tracks and cover songs from Heresy, Negative FX, Fear Of God and BGK.
A total of 32 songs that will blow your socks off.