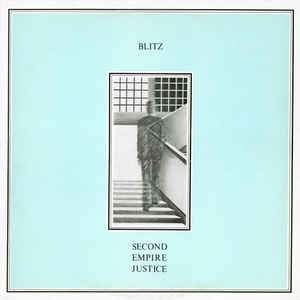 BACK IN STOCK!!! Released a year after their much hearled debut album 'Voice of a  Generation' , 'Second Empire Justice'  features half the members from  the original line-up and with a new sound. While initially being an  Oi!/Skinhead Punk band, on 'Second Empire Justice' they not only changed  members and their look but also their sound and released a Post-Punk  classic with a heavy dose of Joy Division worship, produced by Chris  Nagle. While Nagle had also produced their debut album, he had also  engineered the Joy Division and  New Order albums under Martin Hannett  and had also engineered various other post punk albums of the day from  the likes of The Durutti Column, A Certain Ratio and Magazine.

Together the band and Nagle created a masterpiece while not appreciated  at the time, especially by their original skinhead/Oi! fanbase. The  album would go onto influence tons of post-punk/darkwave bands that  sprouted from the ashes of punk/hardcore bands decades later and become  one of the most sought after albums of the golden age of post-punk.. So sit back and listen to these beautiful moody haunting guitars,  dancing basslines and emotionally fragile vocals all the while retaining  a punk ferocity.