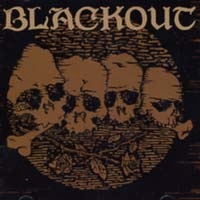 From the storms of Minneapolis' sub-zero winters hails BLACKOUT with their debut.
Drawing on equal parts hardcore, punk, blues, and metal, this is ten tracks of raw, unabided Midwest madness.
Recorded by Jon Greenslit at the House of Misery Studios in 2006, this is the alcoholic soundtrack for the apocalypse - a heavy influential doseage of MOTORHEAD and POISON IDEA while retaining a strong DIY punk sensibility. Impeccably catchy riffs and bluesy guitar solos wind their way through songs of drinking and rogue debauchery. Includes current and ex-members of PROVOKED, SCORNED, STILLBORN, ASSRASH, and PHALANX, among others.