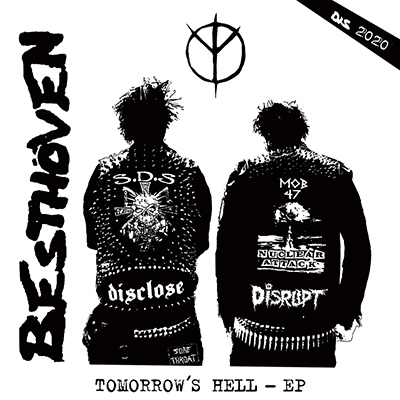 BESTHÖVEN is a one-man band from Gama City, Brasil active since the year 1990 very well-known for their numerous full releases and split outputs with for example FINAL SLUM WAR, DISCLOSE, TROXIN 245, WARVICTIMS, SKELETON, ... . BESTHÖVEN plays full-on-charge D-Beat, Raw Punk, Crustcore taken influences from such great bands as DISCHARGE or DISCLOSE, on "Tomorrow´s Hell" you´ll get eight new tracks (one of them sung in Portuguese) recorded at the Batcave Studio between 18th to 28th january 2020. The Dis-Nightmare continues !
Altogether 500 copies will be pressed, they are all housed in a fold-out cover and will come with extra insert including "band" photos. Two different editions will be unleashed:
# Standard Edition of 400 copies on Black vinyl