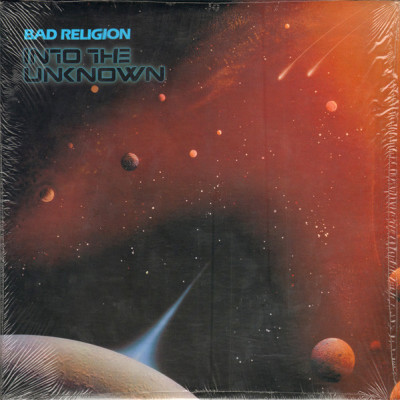 Into The Unknown (LP)

BACK IN STOCK!!! Fan Club edition of the black sheep amongst the Bad Religion catalog. Released in 1983 and long-dismissed from the band's legacy, this record saw Bad Religion delving into prog rock and new wave influences.
Up for sale is the super rare and highly sought after prog album by punk band Bad Religion "Into the Unknown". Below is the interesting history of this album:
The 2nd album released by Bad Religion. The album features a keyboard-heavy prog rock sound which is unlike anything else in their discography. Bassist Jay Bentley quit the band during the recording of the first song and previous drummer Pete Finestone is also absent from the record. Epitaph Records pressed up 10,000 copies of the record which they claim were mostly returned by dissatisfied fans. The returns were stored in the Bomp Records warehouse where Brett Gurewitz's then-girlfriend worked and a number of copies were sold through Bomp, although just how many is disputed. These sales were not authorized by the band or label. Jay Bentley also stated that he and Brett destroyed several boxes of the record and other copies that had been stored in Bentley's mother's basement were ruined by an exploding water heater.
The record has been mostly disowned by the group. Brett Gurewitz, who owns the rights to the record via Epitaph Records, has been particularly vocal about his displeasure with album and long refused to reissue the release. However, the first authorized reissue was included in a Bad Religion vinyl box set released in the fall of 2010.
The song "Time And Disregard" was originally written for a side project that Greg Graffin had with Greg Hetson (who was not a member of Bad Religion at this time) called Greg Greg.