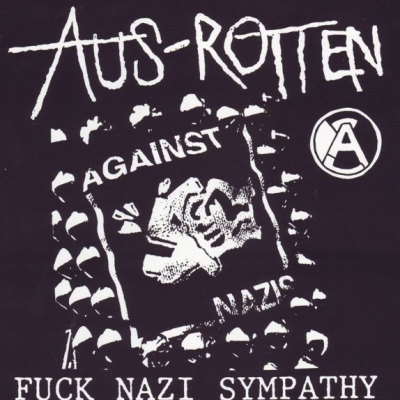 BACK IN STOCK!!! Originally pressed in 1994, this is a classic of 90's anarcho-punk, one of the best selling records ever at the time.
CLASSIC 90's punk rock record! I could not believe this record when I heard it for the first time over 10 years ago ... as essential now as it was when it was released. Aus Rotten was one of the best punk bands or the 90's for two reasons. 1. They play excellent hardcore punk in the tradition of Discharge, the Varukers and Chaos UK 2. They make the connection between punk and radical politics in a clear and understandable way. That is to say, Aus Rotten's politics are right up front, but phrased in an accessible fashion rather than obtuse intellectualisms or a PC sermon. Aus Rotten's popularity brings to mind the days of Discharge, Conflict and the Subhuman when political punk bands were just as well known and liked as commercial bands.