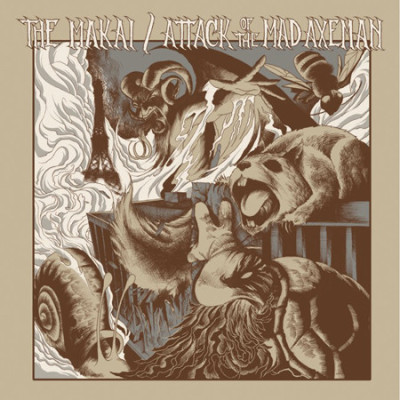 ATTACK OF THE MAD AXEMAN / THE MAKAI

Germany's Attack Of The Mad Axeman are four dispossessed forest animals who have taken up instruments to play scathingly brutal Grind like the mighty Brutal Truth or Cyness. Their four tracks whip by almost too quickly to process. Relentless blast beats and lightning-speed riffing combine with eco-conscious lyrics to create a volatile concoction not for the weak of heart. The Makai from California pummel your eardrums with a barrage of intensity that will make even the strongest listeners tremble in fear. "Orpheus' Plight" recounts the ancient legend of Orpheus and Eurydice. The Makai deliver a cool mixture of traditional HC-Punk like His Hero is Gone with the heavy melodies of Baroness. The vocalist and the song structure reminds me a bit of the the German band Akephal, too. The powerful opening of the song gives way to a slower and more melodic interlude, seamlessly integrating with the subject matter of the lyrics.