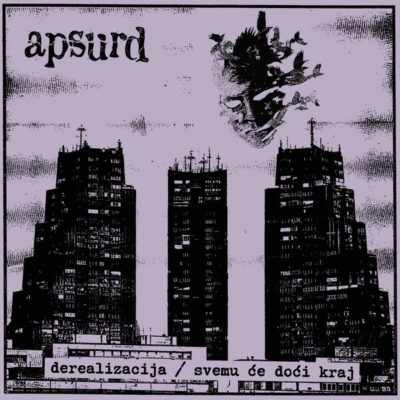 Apsurd's Derealizacija/Svemu će doći kraj 12" is the band's first output in the form of vinyl format.

If you somehow missed one of our favourite bands from the ex-YU area, we'll mention that Apsurd are Belgrade based group of individuals, even though the band members come from Serbia and share drummer from USA. There's no much difference in the songwriting style when it comes to newly recorded "Svemu će doći kraj" EP and we mean that in a good way. The band still plays straightforward, energetic and noisy hardcore punk heavily influenced by the punk and hardcore scene of former Yugoslavia. Throw in some vibe and influence from Crass Records and Corpus Christi catalogue and you'll get the picture right there.

Whether we're talking about primal and primitive hardcore of U.B.R., scratchy and noisy guitar work of Solunski Front or the hopeless female yelling and spoken word moments Tožibabe were known for, this band covers it all. We like to tell people this is Yugo-punk reinvented for the new millenium so if this means anything to you don't sleep on this pogoing punk troop!

Available in purple and orange silkscreened sleeves with two sided insert with lyrics and english translations. Limited to 500 copies.