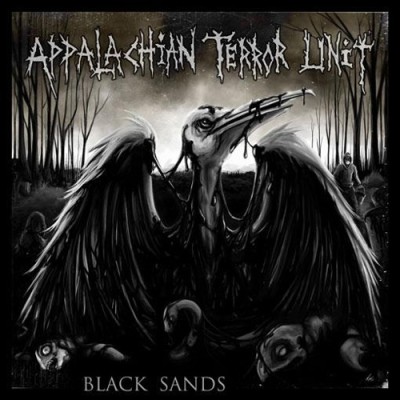 BACK IN STOCK!!! APPALACHIAN TERROR UNIT is a band that truly defines what crust should be.Hard and heavy punk, with in your face politics. In an age where the punk scene seems to be defined more by the size of one’s record collection or how perfectly one can clone an obscure overseas hardcore band from 25 years ago, the ATU approach is more than welcome. It seems like forever since I’ve listened to a new record which focuses on environmental and animal concerns, which actually concerns me. In the internet age, has our culture stopped giving a shit about anything? Are the times we’re living in too far gone to even bother doing something as simple as make conscious dietary choices? Thankfully on this raging new slab of vinyl, ATU has continued on their path of shoving these concerns down our collective throat – we need it. ATU is one of the most important and relevant bands in the punk scene today, and this 7" is among the best material they have recorded to date. It’s my hope that this band will inspire more kids to start thinking about the horrific conditions we face today, and at the very least start putting politics back in punk.

Unjust & unwanted wars, poverty, prisons for profit and now cyberspace censorship…unholy fuck, there is some crazy shit happening right now, and luckily some bands are willing to take a stand against it! Appalachian Terror Unit are a West Virginia anarcho punk band who create music that gives a voice to the downpressed humans worldwide. Sometime in the near future, ATU will be releasing their Black Sands 7″ via Profane Existence. This record will not disappoint – 4 songs that clock in over 13 minutes, packed with awesome metallic riffs and lyrics that bring home issues we all should have on our minds. What’s so on point about this band is that they are the total fucking package; not only do they incite change on the lyrical tip, but the music they lay down is so epic. ATU are able to balance all of the influences of metal, crust and punk with pure passion and conviction, which makes their songs dig deeper into your mind. On their title track, “Black Sands,” they have this riff that is dipped in caustic empathy, that screams just as loud as both vocalists and gets your braincells spazzing out on some revolution brainwaves. This band composes tunes that are laced with righteous fury that will stand the test of time. Fuck the powers that be, ATU are a band that represents the truth how I see it, and they manifest what the world needs to hear if the planet has any chance of sticking around. What I just can’t get over is their mammoth songwriting. When you hear “The End Of Complacency,” it fucking bleeds with the anger of the have nots, but at the same time it packs so much angst that’s directed at the truly wicked, you can’t help but get hyped. Damn, I’ve got to give the drummer some, on every track the warrior beat is alive and well. Ever since I heard this band years ago, I have been impressed with the dual vocals, and nothing has changed – I’m still into the vocal delivery on this 7″. If Black Sands could transform into a weapon, it would destroy those who have been taking advantage of us for their own profits. Appalachian Terror Unit are not terrorists, they are our freedom fighters – let’s all stand with them in unity, the world is ours! -CVLT NATION