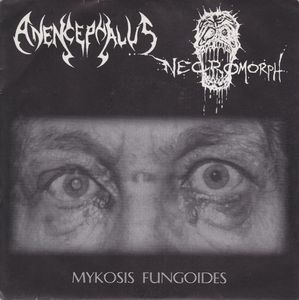 Great split ep by two German death metal bands. NECROMORPH was formed in August 1995 and since then experienced lots of changes in its line up, which actually formed the band"s current musical and technical level. Remaining original band members are Fritz (r.) and Scimitartor (2nd f.l.). Feuersturm (l.) torments the guitar since 1998 and since November 1999 NecroScull is torturing the drum kit (2nd f.r.). From spring to fall 2002 Jana enriched the band"s lineup, playing the second guitar. Founded as a Black Metal band, NECROMORPH"s current style could be explained as a raw mixture of Death and Thrash Metal as well as Grind and Crust elements. ANENCEPHALUS was formed as a 2-man band called RAPED CADAVER in 1992. The 2 members, Wulf and Pedda then were joined by Tim and Micha in 1994, and changed the name to ANENCEPHALUS. Since then the line-up has changed several times, and the band has released a demo, a mCD, and a 7" single so far. (Written by VP).