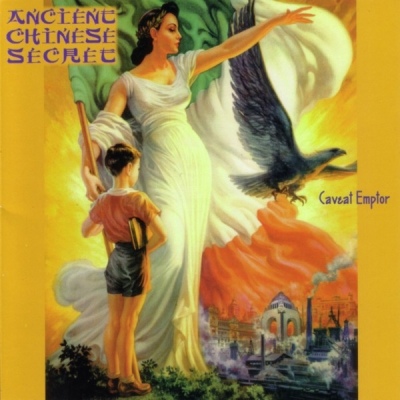 For a label that normally puts out either blazing power-violence or ultra-torturing sludge-core, Ancient Chinese Secret is a definite stand-out for Slap-a-Ham's entire back catalog.
There are a couple reasons for this: for one, the minimal line-up consists of Spazz's Chris Dodge on bass, his wife Lydia on vocals and a drummer completing the line up, that's it.
Second of all, there's not once ounce of metal or a trace of heaviness for that matter.
Rather, ACS has more of an off-beat, quirky but non-threatening appeal to them.
This is in part thanks to the lack of distortion and Lydia's ability to talk loudly into the mic rather than scream at the top of her lungs.
Not to say that Caveat Emptor is bad or anything; on top of all this, the occasional tape loop samples -with the last track mixing a slew of cartoon sound effects-and speed metal drumming give this album it's own uniqueness.
Playful, but not to the point of being wholesome family entertainment.
~ Mike DaRonco