Mailorder > 12" > AGATHOCLES – Thanks For Your Hostility DoLP 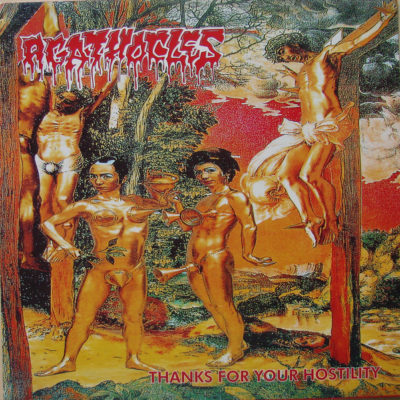 Thanks For Your Hostility (DoLP)

I think that "Thanks for your hostility" is the best Agathocles record title ever. But then, I've been a little disappointed when I listened to the musical content itself; probably by the inadequat sound production. It's very clear and actually powerful, but guitars sound a little weak and find a way a little bit more technical than before, drums also have a slightly snare, feeble sound... vocals are great though, well, at least on the grindcore songs, because there's a very high percentage of crusty/hardcore influences on songs like "Until it bleeds", "Hatred is the cure", "Cheers humanity cheers", "No use... hatred" & many more! But all in all I truly enjoy their crust side there! Then, maybe the sound is too clear to play crust here too... But anyway, some riffs reminded me good old crust bands like Mob 47 and alikes... So, it's nice! And yes! Agathocles is always Agathocles and their mincing feeling is always alive and well; There are many grindcore tracks, with fast drumming, growls, tortured screams and an abundant use of splattery vocal effects! The great songs are "Criminalisation of strange behaviour", "Strangulation", "Life control", "Be your own god", "He cared" & more.... The lyrics are always socially aware and always more sarcastic... The cover artwork is not a masterpiece. Well, this is although a 40 tracks LP of really intense musical aggression! It will probably please to those more into hardcore & crust, but it has a big portion of great grind! So recquires the listening of grind freaks too. Obviously a must-have for Agathocles completists. The bonus material (11 tracks) was recorded in the Natianal Radio Station in april 96 and was broadcasted a few month later.