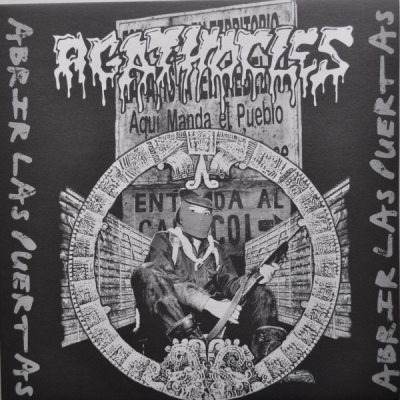 Special AGATHOCLES release recorded in a studio during their 2007's South American tour. "Abrir Las Puertas" features a lot of the more recent songs by Agathocles, mixed with some classics on each side. So you can find modern tunes like Only Friction, Bang Bang, Axe The Tax, O.S.L. or Porcelain A mixed with some of the best songs we used to play at beach singalongs late on a summer night, like Razor Sharp Daggers, Splattered Brains or Mutilated Regurgitator. If you love the Belgian godfathers of grindcore, mince-core, good ol’ extreme music or socially aware stuff, you’ll love this record. The mixing is very clear and, surprisingly, very professionally done, with each instrument clearly recognizable and well balanced. 21 songs of mincing old school grind terrorism at its finest form.