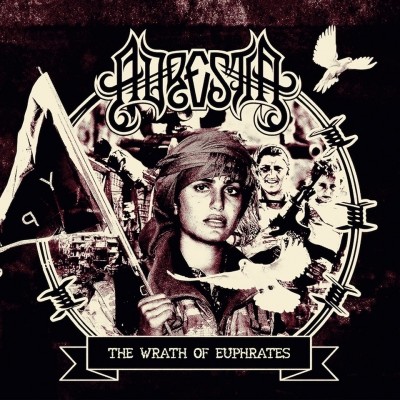 The Wrath Of Euphrates (LP)

The new and 2nd album for this Swedish band formed by ex-Shades Of Gray, Future Ruins members. 13 new tracks of old school death metal spiked D-BEAT crust punk remembering the best moments of Disfear, Martyrdöd and Entombed! The lyrically content is by far outstanding but let the band explain here:

“Our new album The Wrath Of Euphrates is named after the military operation launched by the Syrian Democratic Forces against the ISIS, with the goal of capturing the Islamic State’s capital city Raqqa, a goal that was accomplished in October 2017.

This lyrical content on this album could be seen as a time document, since most of the lyrics deal with events that took place in the world during the process of writing these songs. As much as this album should be seen as a canalization of our anger and fear over the populist politicians, climate change deniers, the oppression, the wars, the racism and misogyny that plagues our time, this album is also a tribute to the resistance. A tribute to the freedom fighters of Rojava, who defeated the world’s worst terrorist group and built real democracy in a place where democracy never existed. A tribute to all the people worldwide fighting against climate change, racism and misogyny. A tribute to the international punk community and to all other people who dedicate their lives to making this world a better place.

The Wrath Of Euphrates was recorded by Ulf Blomberg in Hoborec studio, while the mixing and mastering was done by Henrik Udd.

On this album we had the pleasure of working with some of our favorite punk/HC vocalists. We recorded 2 songs together with Tomas Jonsson of Anti Cimex/Wolfpack, who manage to deliver killer vocals despite the fact that he hadn’t been in a studio for 20 years.

The album also features collaborations with Brad Boatright of From Ashes Rise, and with Nastya Palamar of Exist M.