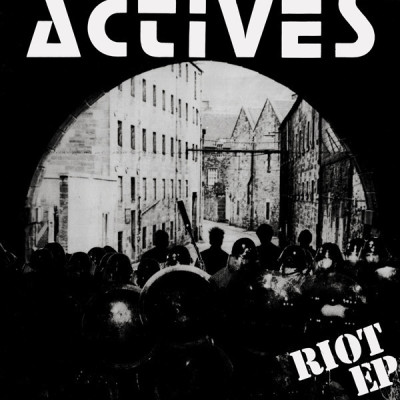 BACK IN STOCK!!! The ACTIVES were actually born of frustrated roadies and followers of "The ALTERNATIVE" in Dunfermline, Fife, Scotland in December '81. A number of support gigs with the Alternative followed but it soon became apparent both bands were playing to different sections of the punk audience. Difference of opinions, especially over lyrical content, saw the Actives being asked to leave the shared practice pad in late '82.
A high degree of musical mediocrity fused with an uncontrolled desire to play very loud and very fast led to a publishing contract deal in 1982 with ex "MENACE" member Charlie Casey. A record deal followed in early '83. Two months later the single Riot E.P. was released. After the recording of the album 'Kick It Down', he much more musically satisfying (and last) single Wait '& See!' was released in late '83.
In early '84 the singer, Lewis, left the band and the ex "Alternative" member, Rice, joined on lead vocals. A number of demo tapes followed but no further records were released.
Rice left the band in '85. The ex manager, Sconey, then took on the mantle of singer. Further demo tapes were made but the band eventually called it a day in late '87.
This 2 gems, finally compiled on one LP have been brought to life again by Puke N Vomit Records.