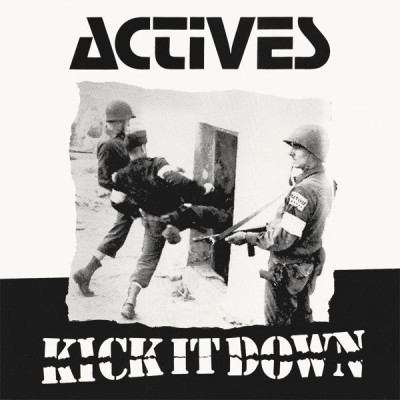 Kick It Down (LP)

The ACTIVES were actually born of frustrated roadies and followers of "The ALTERNATIVE" in Dunfermline, Fife, Scotland in December '81. The Alternative shared their practice pad, instruments and social life with the Actives, indeed the original Actives guitarist, Dougie, joined the Alternative in mid '82. A number of support gigs with the Alternative followed but it soon became apparent both bands were playing to different sections of the punk audience. Difference of opinions, especially over lyrical content, saw the Actives being asked to leave the shared practice pad in late '82. In 1982, their uncontrolled desire to play very loud and very fast led to a publishing contract deal with ex "MENACE" member Charlie Casey. A record deal followed in early '83. Two months later the single Riot E.P. was released, and a frenzy of live support gigs followed, opening for the Exploited, the Adicts, the Treats, Abrasive Wheels and the Toy Dolls. Their debut LP 'Kick It Down!' came out in 1983 on the Quiet label and never reissued ever since - so act fast! An unmissable piece of the UK punk history in a limited US import edition of 500 copies!