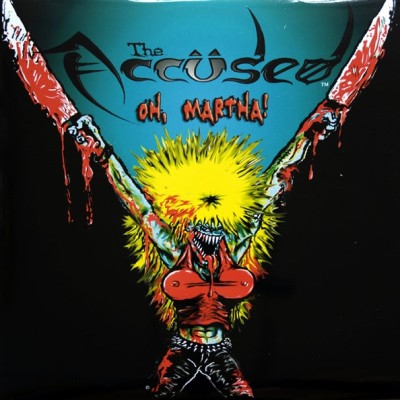 This is a vinyl version licensed from the Condor Records 'Oh Martha!' CD release in 2004. This triumphant record heralds The Return of the Splatter Rock Kings to their terrifyingly-sick ways. For the entire length of this Splatter-Drenched LP, The ACCUSED prove the crown still fits. Founding member and guitarist, Tommy Niemeyer says: "'Oh Martha!' is easily one of the top 2 albums we've done. It was intentionally written with the knowledge that we raised the bar for ourselves over 10 years earlier. So I said, let's fucking kick this album's ass!..and we did." Cover art for this Unrest Records pressing was drawn by Tommy Niemeyer himself, in pure Splatter Rock fashion!
Martha Lives!!!