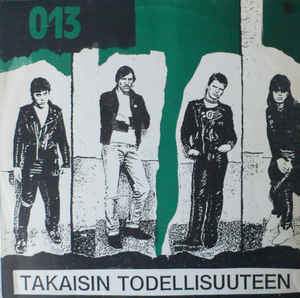 One of the best and most underappreciated albums to emerge from the legendary Finnish Punk explosion. 013 were an amazing short-lived but hugely influential Finnish band. They were all the more amazing for having a sound and spirit all their own. A truly pure Punk underground sound inspired by the sounds of 77 and 78 , loaded with catchy as fuck cool guitars and melodic vocals made every song instantly memorable. The three-piece from Pukkila, Finland, originally appeared on the now sought after collectable Propaganda EP released in 1981 and the legendary Russia Bombs Finland compilation LP released the following year. The band’s only album was the Takaisin Todellisuuteen LP which was released on Propaganda Records in 1983, and the band split up shortly afterwards.