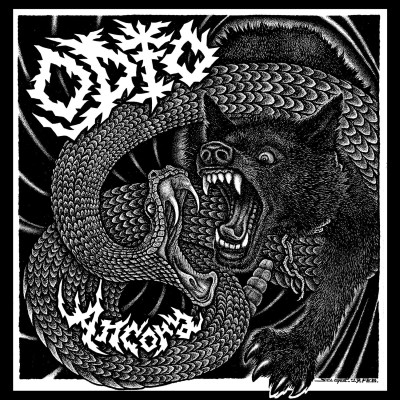 From the depths of Oakland CA's underground, Odio fulfills the listeners ears with intense rythmatic aggression and delay drenched vocals for the unhinged. Simplistic in idea but packing a real punch, you can't deny that these guys really know how to structure a song. Odio takes influence from the deepest darkest corners of 80's Japanese hardcore and then again from more contemporary bands from Spain. All in all Odio is making a noise of their own. The band is currently on a tour around the globe that has consisted of south East Asia, Australia, and now Europe, titled: "Odio I Confini" (Hatred Of Boarders) sharing members of other US bands Torso & Korrosive, Odio is a powerhouse live and on record. Don't miss them this summer on tour. Odio "Ancora" (Again) Is an 8 track 12" Ep that is not to be missed. Ancora is out now on Agipunk records 1000 press w/ 100 special split color black and clear splatter vinyl with screen printed wood covers artwork by Sugi includes poster.