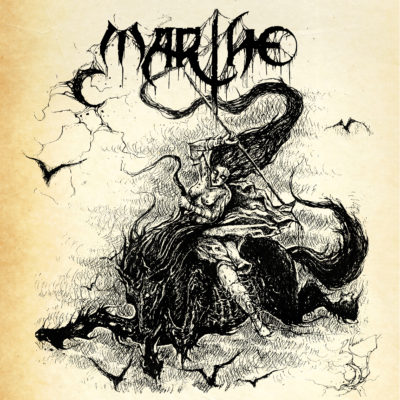 MARTHE is the solo project of Marzia, worldwide known for being Horror Vacui's guitar player and for drumming in Kontatto, Tuono, Campus Sterminii, Death From Above, Doxie and countless other bands. Between one practice and another with the aforementioned bands, she found the time to sit down by herself and record the tunes that became the "Sisters Of Darkness" demo tape, self-released a year ago and then repressed on tape by Caligari Records (USA). I'm personally not too much into metal, but the four songs on this demo blew my minds and I think they deserve to be released on vinyl too. Fans of Bathory's second wave will love this one so much that Marzia will be crowned as the Queen of Valkyrian Metal. Everything on this record has been written, performed and mixed by Marzia. Mastered by Jack Control at Enormous Door . Limited to 300 hand numbered copies on Ivory White Colored Vinyl, the first 100 will come with a nice embroidered patch.