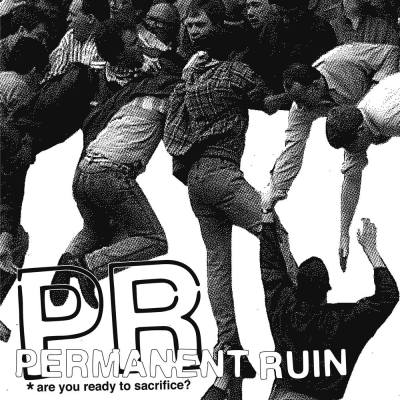 Are You Ready To Sacrifice? (LP)

PERMANENT RUIN is probably one of the best current (and accessible) Bay Area bands. You should really only have to know that PERMANENT RUIN are 2/3 of IN DISGUST with the singer from CONDENADA, but the grinding insanity that was IN DISGUST has been injected with manic Japanese riffing and howling insistent female vocals that keep you on edge from their first belt. This is powerful shit! This LP compiles their 3 7" EP's plus a bunch of unheard songs (5 tracks) for a total of 21 songs!!! So let’s talk about the debut Permanent Ruin first EP ("Hell Is Real"). This is INSANE – breakneck thrash with huge divebombs and red-eyed intensity. The first scream singer Mariam lets off on opener “Legacy” sounds like it’s going to jump off of the record and wrap itself around your throat. Six tracks and it never lets up for a moment! That’ll never go down, though. Maybe it didn’t take eight years of Republican bullshit to really get political punk kicked back into gear, but rather the five years and counting of misery that followed. Boot’s still down on your throat. In their second EP ("Más Allá De La Muerte") there's a stronger power violence influence, but like my favorite bands who get described as power violence, this sounds more like straightforward hardcore played super, super fast and angry. In other words, it's fast, but the changes from fast to mid-paced parts don't feel gimmicky or overwrought. Definitely one of the tightest, angriest bands out right now... The newer 7" EP is called "San Jose" and, just like before, you know this fucker ain't for no damn milk-babies, this is for the true punk freaks, from the blinding speed, the hard-as-fuck breakdowns, and the best vox in the biz! About the new unheard songs, well, that's gonna be a surprise. The Record will be out on time for their first European tour (April/May 2015). Stay tuned.